You Are Never Alone

I started this blog in 2017 to share my journey of living my life to the fullest as a wife and mother while following my passions to do things that I love to do for myself.

I had commented to a friend a few weeks ago, that since my dream of pursuing a career in event planning has kept me very busy in a really good way, I have not posted a blog post in a very long time.

She asked me why do I even want to continue blogging with my hectic schedule, and I immediately responded that if at least one person read one of my blog posts and could relate or help them in some way, then making a little time to write something to share with others has been worth it.

As we go into the Fall season this weekend I have noticed for some years now, that I go through a transition from a less hectic summer schedule with longer days to do things with the family and projects, to a rushing around September getting back to the school schedule and other activities.

My anxiety during this transition usually runs really high and last week, I had to have some hard family adult conversations, that I have been putting off with some family members that has me in a down cycle funk this week.

As I have gotten older it has become easier for me to really listen to others and help them talk out their issues but when I have my own feelings to sort out, or make myself accept things in my life that I do not have control of, I tend to just look the other way and not deal with the emotions, but last week, this one issue I have had tucked away for a long time finally had to be dealt with.

Long story short all of the emotions and anxiety from last week, made me feel physically ill and could barley get out of bed today.  By mid day I was coming around and a dear friend of mine popped in my head.  I realized it would have been her birthday next week.

Brenda is truly my Guardian Angel, who I met almost 18 years ago when I was in my mid 20's as a very introverted single mother.  We met at work and she quickly became a mentor for me.  She was a confinement, warm person that was married to an amazing man that adored her.  Brenda introduced me to so many new things from Barbara Streisand movies and songs, good wine and so much more but what was the most important was how she helped me talk through some tough decisions I had to make during that time.  Even though I was already a mother of a five year old, I still needed a lot of growing up to do and she was there for me.

With time Brenda opened up to me like I had so fast after we had met.  I admired her so much for how brave she was for overcoming so much from her childhood.  I was blessed to know her for  about two years and all that I was able to learn from her.  The last time I saw her on that Monday, June 1st so many years ago, she asked if I would go to happy hour with her after work, but I couldn't because of a friends birthday dinner.

The next day her husband came to our job desperately looking for Brenda who had not come home the night before and had left him a good bye note.  The police,me and all of her other friends helped with the search.  A week later she was found, Brenda decided for her own reasons that some did not understand, but I did, she felt it was better to leave us.

For many years I felt so much guilt for not hanging out with her that night, that maybe if I had been with her, she would have decided not to go through with her suicide.

I am at peace with it all now and know that she is my Guardian Angel and from time to time she pops in my mind just because, or when I'm going through tough moments and need to make decisions.

As I was home today not feeling so great, I was sitting in my chair wrapped in a comforter and I suddenly realized that the comforter used to belong to Brenda and that next week would have been her
birthday.  Just like that, I knew she was there with me and I knew that things were going to get better.

Happy Birthday to my Guardian Angel:)! 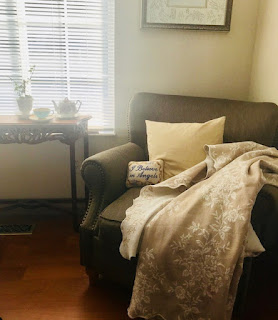